Citing a spike in new coronavirus cases Governor Newsom yesterday announced new CA restrictions. In his press conference last Friday he encouraged listeners to download the state’s raw data and play with it, so I did.

Wanting to understand the spike, I grouped the data for each county (it’s reported by county in their files) into totals per day for the state. Heeding a cautionary note about irregularities in daily reporting, I calculated 7-day averages for new daily cases and new daily deaths. It should go without saying that “new daily cases” means new cases known among people tested, and therefore says nothing about the base rate in the population. The number of daily tests in CA grows roughly exponentially. Each day we do more tests than we did the previous day. This increase in daily testing is apparent in the blue line in the below chart. On the same chart I plotted 7-day averages of daily reported deaths. 7-day-averaged daily new deaths peaked on Apr 24 and have declined roughly steadily since. 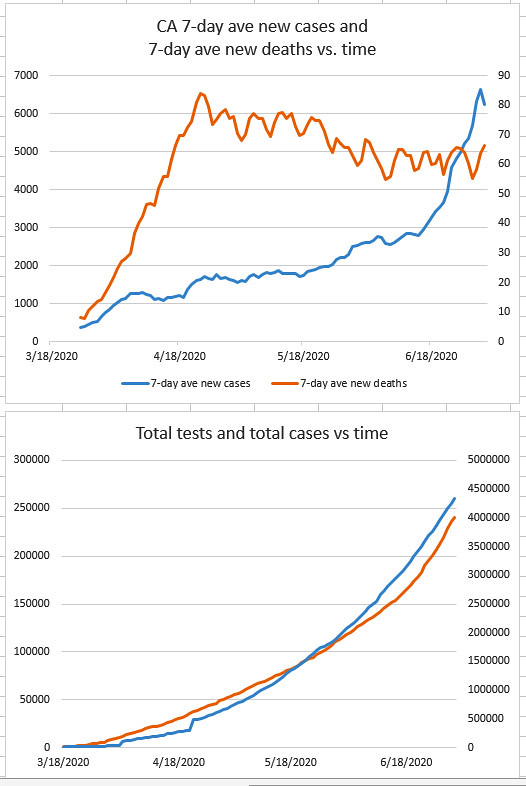 In the next chart I plotted total tests (not daily new tests) and total cases vs. time. The left vertical axis and the red line indicate total known cases. The blue line, which rises similarly, indicates the total test count.

The conditions of people tested has likely changed over time. Initially, tests were only available to sick people. Therefore we should expect a change in the ratio of deaths per person tested, and that is the case. To make the numbers more understandable, I plotted deaths per 1000 known cases over time (red line below). That rate peaks at about May 1, stays roughly even for three weeks, then drops by 50% at the end of June.

Another look at the change in nature of people being tested is the plot of cases per test (blue line below), or, as plotted here for easier reading, cases per 1000 tests. Note this plot is of a daily ratio. For the first two weeks of the plot (the last two weeks of March) both the numerator and denominator of the values forming the plotted values are small. So the first few weeks of data are unreliable. On Apr 3, CA performed three times as many tests as on the previous day (113687 vs. 35267) but the increase in positive tests between Apr 3 and 4 was small. Therefore there is an abrupt drop in the cases (positive tests) per 1000 tests on Apr 3. 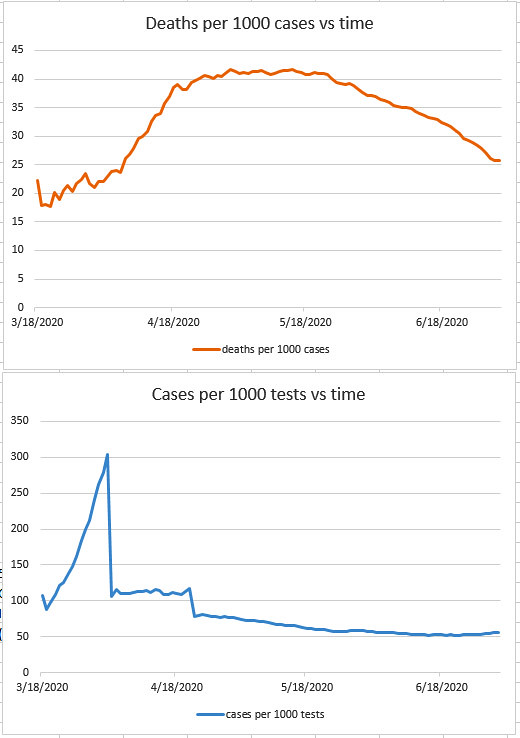 I see nothing in these plots that I would describe as a spike. I’ll leave any further interpretation to readers. The data plotted here is exactly as taken from data.ca.gov with the exception of one data point. The total test count in the ca.gov data for May 27 is obviously wrong. It is much higher than the total at May 28, and totals (as opposed to daily new values) cannot decrease. The value used in my plots is interpolated from the preceding and following days. Email me or leave a comment if you’d like a copy of my Excel file that combines data from several of the ca.gov files, groups the county data together, calculates the 7-day averages for smoothing, and shows the source of the plots shown here.

This entry was posted on July 2, 2020, 10:39 pm and is filed under Uncategorized. You can follow any responses to this entry through RSS 2.0. You can leave a response, or trackback from your own site.