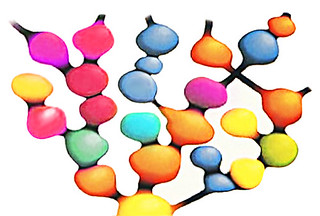 No Space aliens here. This deals with the question of whether Stanford physicist Andrei Linde’s work deserves to be called science or whether it is in the realm of pseudoscience some call “not even wrong.” While debated among scientists, this question isn’t really in the domain of science, but of philosophy. If use of the term abduction to describe a form of reasoning isn’t familiar, please read my previous post.

Linde is a key figure in the family of theories of cosmic origins called inflation. Inflation holds that in a period lasting roughly 10E-30 seconds the cosmos doubled in size by at least 100 orders of magnitude. Quantum fluctuations in the then-tiny inflationary region became the gravitational seeds that formed the galaxies and galaxy clusters we now observe. Proponents of the theory hold that it is the best explanation for universal homogeneity and isotropy of matter, the miniscule temperature anisotropies of the cosmic microwave background radiation, geometrical flatness of the universe, and the absence of magnetic monopoles. Inflation requires that the universe should be incredibly homogeneous, isotropic and conform to Euclidean geometry – but not completely. It’s perturbations should be Gaussian and adiabatic, and it requires a nonzero vacuum energy that is, however, extremely close to zero.

In Linde’s model of inflation, the rapidly expanding regions branch off from other expanding regions and occasionally enter a non-inflating phase. But the generation rate of inflationary regions is much higher than the rate of termination of inflation within regions. Therefore, the volume of the inflating part of space is always much larger than the part where inflation has stopped, Terminology varies; for sake of clarity I’ll use multiverse to describe all of space and universe (sometimes Linde uses bubble universe) to describe each separate inflating region or region where inflation has stopped, as is the case where we live. Each of universe in this multiverse can have radically different laws of physics (more accurately, different physical constants and properties). Finally, note that this multiverse scenario has nothing to do with the more popular parallel-universe consequences of the Many Worlds interpretation of quantum mechanics. Linde’s work is particularly interesting for looking at  scientific-realism and empiricist leanings of living scientists. Chaotic inflation is unappealing to empiricists, but less maligned than string theory.

Linde gave a fun, engaging hour-long intro to his version of inflation in a talk to the SETI Institute in 2012 (above). He presents the theory briefly, using the imagery of fractals, and then gives a long defense of anthropic reasoning. Anthropic arguments may, at first glance, appear to be mere tautologies, but scrutiny shows something more subtle and complex. Linde once said, “those who dislike anthropic principles are simply in denial.” In the SETI talk he jocularly explains the anthropic response to the apparent fine tuning of the universe. Finally, he gives a philosophical justification for his theory, explicitly rejecting empiricists’ demands that all predictions be falsifiable, and making inference to the best explanation primary with a justification of “best” by process of elimination.

Curiously, anthropic reasoning, often reviled when applied to universe-sized entities, is readily accepted on smaller scales. Roger Penrose is dubious, saying such reasoning “tends to be invoked by theorists whenever they do not have a good enough theory to explain the observed facts.” But the earth and life on it in some ways seems a bag of unlikely coincidences. Life requires water and the earth is just the right distance from the sun to allow liquid water. It’s no surprise that we don’t find ourselves on Venus, because it has no water. If the overwhelming majority of planets in the universe are uninhabitable the apparent coincidence that we find ourselves on one that is habitable evaporates. If the overwhelming majority of universes don’t support star formation because of incompatible vacuum energy, the apparent fine tuning of that value here is demystified.

On vacuum energy, Linde says in the SETI talk, “that’s why the energy of the universe is so tiny, because if non-tiny, we would not be talking about it.”

Addressing his empiricist critics he says:

“Is it physics or metaphysics? Can it be experimentally tested? … This theory provides the only known explanation of numerous anthropic coincidences (extremely small vacuum energy, strange masses of elementary particles, etc.). In this sense it was already tested… When you have eliminated the impossible, whatever remains, however improbable, must be the truth.

Mass of the neutron is just slightly larger than mass of the proton. Neutrons decay. If protons were just slightly heavier than neutrons, the protons would decay and you’d have a totally different universe where we would not be able to live… Protons are 2000 times heavier than electrons. If electronics were twice as heavy as we find them to be, we wouldn’t be able to live here… What is so special about it? What is so special about it is us. We would be unable to exist in the part of the universe where the electron has a different mass.”

Noting that the American judicial system is based on inference to the best explanation, Linde then uses humor and points to the name of a philosopher on a screen that we don’t see. Presumably the name is either Charles Peirce or Gilbert Harman. He offers a justification that while not completely watertight, is pretty good:

“The multiverse is as of now the only existing explanation of experimental fact [mass of electron]. So when people say we cannot travel that far [beyond the observable universe] and therefore the multiverse theory cannot be tested, it’s already tested experimentally by our own existence. But you may say, ‘what we want is to make a prediction and then check it experimentally.’ My answer to that is that this is not how the American court system works. For example a person killed his wife. They do not repeat the experiment. They do not give him a new wife and a knife, etc. What they do is they use the method suggested by this philosopher. They just try to eliminate impossible options. And once they eliminate them either the guy goes free or the guy goes dead, or a mistake – sorry… So everything is possible. It is not necessary to repeat the experiment and check what is going to happen with the universe if it’s cooked up differently. If what we have provides the only explanation of what we see, that’s already something.”

Linde then goes farther down the road of anthropic reasoning than I’ve seen others do, responding to famous quotes by Einstein and Wigner, following with a much less famous retort to Wigner by Israel Gelfand. The Gelfand quote, echoing Kant, gives a hint as to where Linde is heading:

The miracle of the appropriateness of the language of mathematics for the formulation of the laws of physics is a wonderful gift, which we neither understand nor deserve.  (The Unreasonable Effectiveness of Mathematics ) – Eugene Wigner

Linde says Einstein and Wigner’s puzzles are easily explained. If a universe obeys discoverable laws, it can be considered as an undeserved gift of God to physicists and mathematicians. But elsewhere, in a universe that is a mess, you cannot make any predictions and your mathematicians and physicists would be totally useless. Linde emphasizes, “Universes that do not produce observers do not produce physicists.” No one in such a universe would contemplate the effectiveness of mathematics. In a universe of high density the interactions would be so swift and strong that once you record anything, a millisecond later it would be gone. Your calculations would be instantly negated. In these universes mathematics and physics are ineffective. But we can only live in universes, says Linde, where natural selection is possible and where predictions are possible. Linde says, as humans, we need to make predictions at every step of our lives. He then jokes, “If we would be in a universe where predictions are impossible we wouldn’t be there” Einstein can only live in the kind of universe where Einstein can ask why the universe is so comprehensible.

Neutrinos and the Higgs field were predicted decades before they were observed. Most would agree that the detection of neutrinos is direct enough that the term “observation” is justified. The Higgs boson, in comparison, was only inferred as the best explanation of the decay patterns of high energy hadron collisions. Could the interpretation of disturbances in the cosmic background radiation as “bruises” caused by collisions between adjacent bubble universes and our own count as confirming evidence of Linde’s model? Could anything else – in practice or in principle – confirm or falsify chaotic inflation? Particle physics isn’t my day job. Let me know if my understanding of the science is wrong or if you have a different view of Linde’s philosophical stance.

As we look out into the universe and identify the many accidents of physics and astronomy that have worked together to our benefit, it almost seems as if the universe must in some sense have known we were coming. – Freeman Dyson

This entry was posted on June 15, 2016, 6:57 pm and is filed under History of Science, Philosophy of Science. You can follow any responses to this entry through RSS 2.0. You can leave a response, or trackback from your own site.