Which Is To Be Master? – Humpty Dumpty’s Research Agenda

Should economics, sociology or management count as science?

2500 years ago, Plato, in The Sophist, described a battle between the gods and the earth giants. The fight was over the foundations of knowledge. The gods thought knowledge came from innate concepts and deductive reasoning only. Euclid’s geometry was a perfect example – self-evident axioms plus deduced theorems. In this model, no experiments are needed. Plato explained that the earth giants, however, sought knowledge through earthly experience. Plato sided with the gods; and his opponents, the Sophists, sided with the giants. Roughly speaking, this battle corresponds to the modern tension between rationalism (the gods) and empiricism (the giants). For the gods, the articles of knowledge must be timeless, universal and certain. For the giants, knowledge is contingent, experiential, and merely probable. 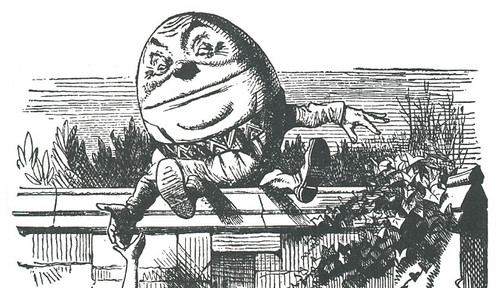 Plato’s approach led the Greeks – Aristotle, most notably – to hold that rocks fall with speeds proportional to their weights, a belief that persisted for 2000 years until Galileo and his insolent ilk had the gall to test it. Science was born.

Enlightenment era physics aside, Plato and the gods are alive and well. Scientists and social reformers of the Enlightenment tried to secularize knowledge. They held that common folk could overturn beliefs with the right evidence. Empirical evidence, in their view, could trump any theory or authority. Math was good for deduction; but what’s good for math is not good for physics, government, and business management.

Euclidean geometry was still regarded as true – a perfect example of knowledge fit for the gods –  throughout the Enlightenment era. But cracks began to emerge in the 1800s through the work of mathematicians like Lobachevsky and Riemann. By considering alternatives to Euclid’s 5th postulate, which never quite seemed to fit with the rest, they invented other valid (internally consistent) geometries, incompatible with Euclid’s. On the surface, Euclid’s geometry seemed correct, by being consistent with our experience. I.e., angle sums of triangles seem to equal 180 degrees. But geometry, being pure and of the gods, should not need validation by experience, nor should it be capable of such validation.

Non-Euclidean Geometry rocked Victorian society and entered the domain of philosophers, just as Special Relativity later did. Hotly debated, its impact on the teaching of geometry became the subject of an entire book by conservative mathematician and logician Charles Dodgson. Before writing that book, Dodgson published a more famous one, Alice in Wonderland.

The mathematical and philosophical content of Alice have been analyzed at length. Alice’s dialogue with Humpty Dumpty is a staple of semantics and semiotics, particularly, Humpty’s use of stipulative definition. Humpty first reasons that “unbirthdays” are better than birthdays, there being so many more of them, and then proclaims glory. Picking up that dialogue, Humpty announces,

‘And only one [day of the year] for birthday presents, you know. There’s glory for you!’

Humpty Dumpty smiled contemptuously. ‘Of course you don’t — till I tell you. I meant “there’s a nice knock-down argument for you!”‘

‘When I use a word,’ Humpty Dumpty said, in rather a scornful tone, ‘it means just what I choose it to mean — neither more nor less.’

‘The question is,’ said Alice, ‘whether you can make words mean so many different things.’

‘The question is,’ said Humpty Dumpty, ‘which is to be master — that’s all.’

Humpty is right that one can redefine terms at will, provided a definition is given. But the exchange hints at a deeper notion. While having a private language is possible, it is also futile, if the purpose of language is communication.

Another aspect of this exchange gets little coverage by analysts. Dodgson has Humpty emphasize the concept of argument (knock-down), nudging us in the direction of formal logic. Humpty is surely a stand-in for the proponents of non-Euclidean geometry, against whom Dodgson is strongly (though wrongly – more below) opposed. Dodgson was also versed in Greek philosophy and Platonic idealism. Humpty is firmly aligned with Plato and the gods. Alice sides with Plato’s earth giants, the sophists. Humpty’s question, which is to be master?, points strongly at the battle between the gods and the giants. Was this Dodgson’s main intent?

When Alice first chases the rabbit down the hole, she says that she fell for a long time, and reasons that the hole must be either very deep or that she fell very slowly. Dodgson, schooled in Newtonian mechanics, knew, unlike the ancient Greeks, that all objects fall at the same speed. So the possibility that Alice fell slowly suggests that even the laws of nature are up for grabs. In science, we accept that new evidence might reverse what we think are the laws of nature, yielding a scientific revolution (paradigm shift).

In trying to vindicate “Euclid’s masterpiece,” as Dodgson called it, he is trying to free himself from an unpleasant logical truth: within the realm of math, we have no basis to the think the world is Euclidean rather than Lobichevskian. He’s trying to rescue conservative mathematics (Euclidean geometry) by empirical means. Logicians would say Dodgson is confusing a synthetic and a posteriori proposition with one that is analytic and a priori. That is, justification of the 5th postulate can’t rely on human experience, observations, or measurements.  Math and reasoning feed science; but science can’t help math at all. Dodgson should know better. In the battle between the gods and the earth giants, experience can only aid the giants, not the gods. As historian of science Steven Goldman put it, “the connection between the products of deductive reasoning and reality is not a logical connection.” If mathematical claims could be validated empirically then they wouldn’t be timeless, universal and certain.

While Dodgson was treating math as a science, some sciences today have the opposite problem. They side with Plato. This may be true even in physics. String theory, by some accounts, has hijacked academic physics, especially its funding. Wolfgang Lerche of CERN called string theory the Stanford propaganda machine working at its fullest. String theory at present isn’t testable. But its explanatory power is huge; and some think physicists pursue it with good reason. It satisfies at least one of the criteria Richard Dawid lists as reasons scientists follow unfalsifiable theories:

Dawid’s criteria may not apply to the social and dismal sciences. Far from the only game in town, too many theories – as untestable as strings, all plausible but mutually incompatible – vie for our Nobel honors.

Privileging innate knowledge and reason – as Plato did – requires denying natural human skepticism. Believing that intuition alone is axiomatic for some types of knowledge of the world requires suppressing skepticism about theorems built on those axioms. Philosophers call this epistemic foundationalism. A behavioral economist might see it as confirmation bias and denialism.

Physicists accuse social scientists of continually modifying their theories to accommodate falsifying evidence, still clinging to a central belief or interpretation. These recall the Marxists’ fancy footwork to rationalize their revolution not first occurring in a developed country, as was predicted. A harsher criticism is that social sciences design theories from the outset to be explanatory but not testable. In the 70s, Clifford D Shearing facetiously wrote in The American Sociologist that “a cursory glance at the development of sociological theory should suggest… that any theorist who seeks sociological fame must insure that his theories are essentially untestable.”

The Antipositivist school is serious about the issue Shearing joked about. Jurgen Habermas argues that sociology cannot explain by appeal to natural law. Deirdre (Donald) McCloskey mocked the empiricist leanings of Milton Friedman as being invalid in principle. Presumably, antipositivists are content that theories only explain, not predict.

The theory and practice model is missing the notion of testing those beliefs against the world or, more importantly, seeking cases in the world that conflict with the theory. Further, it has no notion of theory selection; theories do not compete for success.

Can a research agenda with no concept of theory testing, falsification effort, or theory competition and theory choice be scientific? If so, it seems creationism and astrology should be called science. Several courts (e.g. McLean vs. Arkansas) have ruled against creationism on the grounds that its research program fails to reference natural law, is untestable by evidence, and is certain rather than tentative. Creationism isn’t concerned with details. Intelligent Design (old-earth creationism), for example, is far more concerned with showing Darwinism wrong that with establishing an age of the earth. There is no scholarly debate between old-earth and young-earth creationism on specifics.

Critics say the fields of economists and business and business management are likewise free of scholarly debate. They seem to have similarly thin research agendas. Competition between theories in these fields is lacking; incompatible management theories coexist without challenges. Many theorist/practitioners seem happy to give priority to their model over reality.

Dodgson appears also to have been wise to the problem of a model having priority over the thing it models – believing the model is more real than the world. In Sylvie and Bruno Concluded, he has Mein Herr brag about his country’s map-making progress. They advanced their mapping skill from rendering at 6 inches per mile to 6 yards per mile, and then to 100 yards per mile. Ultimately, they built a map with scale 1:1. The farmers protested its use, saying it would cover the country and shut out the light. Finally, forgetting what models what, Mein Herr explains, “so we now use the country itself, as its own map, and I assure you it does nearly as well.”

Humpty Dumpty had bold theories that he furiously proselytized. Happy to construct his own logical framework and dwell therein, free from empirical testing, his research agenda was as thin as his skin. Perhaps a Nobel Prize and a high post in a management consultancy are in order. Empiricism be damned, there’s glory for you.

There appears to be a sort of war of Giants and Gods going on amongst them; they are fighting with one another about the nature of essence…

Some of them are dragging down all things from heaven and from the unseen to earth, and they literally grasp in their hands rocks and oaks; of these they lay hold, and obstinately maintain, that the things only which can be touched or handled have being or essence…

And that is the reason why their opponents cautiously defend themselves from above, out of an unseen world, mightily contending that true essence consists of certain intelligible and incorporeal ideas…  –  Plato, Sophist

An untestable theory cannot be improved upon by experience. – David Deutsch

An economist is an expert who will know tomorrow why the things he predicted yesterday didn’t happen. – Earl Wilson

This entry was posted on June 5, 2018, 4:27 pm and is filed under History of Science, Management Science. You can follow any responses to this entry through RSS 2.0. You can leave a response, or trackback from your own site.