Science, as an enterprise that acquires knowledge and justified beliefs in the form of testable predictions by systematic iterations of observation and math-based theory, started around the 17th century, somewhere between Copernicus and Newton. That, we learned in school, was the beginning of the scientific revolution. Historians of science tend to regard this great revolution as the one that never happened. That is, as Floris Cohen puts it, the scientific revolution, once an innovative and inspiring concept, has since turned into a straight-jacket. Picking this revolution’s starting point, identifying any cause for it, and deciding what concepts and technological innovations belong to it are problematic.

That said, several writers have made good cases for why the pace of evolution – if not revolution – of modern science accelerated dramatically  in Europe, only when it did, why it has continuously gained steam rather than petering out, its primary driving force, and the associated transformations in our view of how nature works. Some thought the protestant ethic and capitalism set the stage for science. Others thought science couldn’t emerge until the alliance between Christianity and Aristotelianism was dissolved. Moveable type and mass production of books can certainly claim a role, but was it really a prerequisite? Some think a critical mass of ancient Greek writings had to have been transferred to western Europe by the Muslims. The humanist literary critics that enabled repair and reconstruction of ancient texts mangled in translation from Greek to Syriac to Persian to Latin and botched by illiterate medieval scribes certainly played a part. If this sounds like a stretch, note that those critics seem to mark the first occurrence of a collective effort by a group spread across a large geographic space using shared standards to reach a peer-reviewed consensus – a process sharing much with modern science.

But those reasons given for the scientific revolution all have the feel of post hoc theorizing. Might intellectuals of the day, observing these events, have concluded that a resultant scientific revolution was on the horizon? Francis Bacon comes closest to fitting this bill, but his predictions gave little sense that he was envisioning anything like what really happened.

I’ve wondered why the burst of progress in science – as differentiated from plain know-how, nature-knowledge, art, craft, technique, or engineering knowledge – didn’t happen earlier. Why not just after the period of innovation in from about 1100 to 1300 CE in Europe. In this period Jean Buridan invented calculators and almost got the concept of inertia right. Robert Grosseteste hinted at the experiment-theory model of science. Nicole Oresme debunked astrology and gave arguments for a moving earth. But he was the end of this line. After this brief awakening, which also included the invention of banking and the university, progress came to a screeching halt. Some blame the plague, but that can’t be the culprit. Literature of the time barley mentions the plague. Despite the death toll, politics and war went on as usual; but interest in resurrecting ancient Greek knowledge of all sorts tanked.

Why not in the Islamic world in the time of Ali al-Qushji and al-Birjandi? Certainly the mental capacity was there. A layman would have a hard time distinguishing al-Birjandi’s arguments and thought experiments for the earth’s rotation from those of Galileo. But Islamic civilization at the time had plenty of scholars but no institutions for making practical use of such knowledge and its society would not have tolerated displacement of received wisdom by man-made knowledge.

The most compelling case for civilization having been on the brink of science at an earlier time seems to be the late republic or early imperial Rome. This may seem a stretch, since Rome is much more known for brute force than for finesse, despite their flying buttresses, cranes, fire engines, central heating and indoor plumbing. 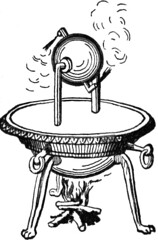 Consider the writings of one Vitruvius, likely Marcus Vitruvius Pollio, in the early reign of Augustus. Vitruvius wrote De Architectura, a ten volume guide to Roman engineering knowledge. Architecture, in Latin, translates accurately into what we call engineering. Rediscovered and widely published during the European renaissance as a standard text for engineers, Vitruvius’s work contains text that seems to contradict what we were all taught about the emergence of the – or a  – scientific method.

Vitruvius is full of surprises. He acknowledges that he is not a scientist (an anachronistic but fitting term) but a collator of Greek learning from several preceding centuries. He describes vanishing point perspective: “…the method of sketching a front with the sides withdrawing into the background, the lines all meeting in the center of a circle.” (See photo below of a fresco in the Oecus at Villa Poppea, Oplontis showing construction lines for vanishing point perspective.) He covers acoustic considerations for theater design, explains central heating technology, and the Archimedian water screw used to drain mines. He mentions a steam engine, likely that later described by Hero of Alexandria (aeolipile drawing at right), which turns heat into rotational energy. He describes a heliocentric model passed down from ancient Greeks. To be sure, there is also much that Vitruvius gets wrong about physics. But so does Galileo.

Most of De Architectura is not really science; it could more accurately be called know-how, technology, or engineering knowledge. Yet it’s close. Vitruvius explains the difference between mere machines, which let men do work, and engines, which derive from ingenuity and allow storing energy.

What convinces me most that Vitruvius – and he surely could not have been alone – truly had the concept of modern scientific method within his grasp is his understanding that a combination of mathematical proof (“demonstration” in his terms) plus theory, plus hands-on practice are needed for real engineering knowledge. Thus he says that what we call science –  theory plus math (demonstration) plus observation (practice) –  is essential to good engineering.

The engineer should be equipped with knowledge of many branches of study and varied kinds of learning, for it is by his judgement that all work done by the other arts is put to test. This knowledge is the child of practice and theory. Practice is the continuous and regular exercise of employment where manual work is done with any necessary material according to the design of a drawing. Theory, on the other hand, is the ability to demonstrate and explain the productions of dexterity on the principles of proportion.

It follows, therefore, that engineers who have aimed at acquiring manual skill without scholarship have never been able to reach a position of authority to correspond to their pains, while those who relied only upon theories and scholarship were obviously hunting the shadow, not the substance. But those who have a thorough knowledge of both, like men armed at all points, have the sooner attained their object and carried authority with them.

It appears, then, that one who professes himself an engineer should be well versed in both directions. He ought, therefore, to be both naturally gifted and amenable to instruction. Neither natural ability without instruction nor instruction without natural ability can make the perfect artist. Let him be educated, skillful with the pencil, instructed in geometry, know much history, have followed the philosophers with attention, understand music, have some knowledge of medicine, know the opinions of the jurists, and be acquainted with astronomy and the theory of the heavens. – Vitruvius – De Architectura, Book 1

Historians, please correct me if you know otherwise, but I don’t think there’s anything else remotely like this on record before Isaac Newton – anything in writing that comes this close to an understanding of modern scientific method.

So what went wrong in Rome? Many blame Christianity for the demise of knowledge in Rome, but that is not the case here. We can’t know for sure, but the later failure of science in the Islamic world seems to provide a clue. Society simply wasn’t ready. Vitruvius and his ilk may have been ready for science, but after nearly a century of civil war (starting with the Italian social wars), Augustus, the senate, and likely the plebes, had seen too much social innovation that all went bad. The vision of science, so evident during the European Enlightenment, as the primary driver of social change, may have been apparent to influential Romans as well, at a time when social change had lost its luster. As seen in writings of Cicero and the correspondence between Pliny and Trajan, Rome now regarded social innovation with suspicion if not contempt. Roman society, at least its government and aristocracy, simply couldn’t risk the main byproduct of science – progress.

History is not merely what happened: it is what happened in the context of what might have happened. – Hugh Trevor-Roper – Oxford Valedictorian Address, 1998

The affairs of the Empire of letters are in a situation in which they never were and never will be again; we are passing now from an old world into the new world, and we are working seriously on the first foundation of the sciences. – Robert Desgabets, Oeuvres complètes de Malebranche, 1676

Newton interjected historical remarks which were neither accurate nor fair. These historical lapses are a reminder that history requires every bit as much attention to detail as does science – and the history of science perhaps twice as much. – Carl Benjamin Boyer, The Rainbow: From Myth to Mathematics, 1957

This entry was posted on June 26, 2015, 11:35 am and is filed under Engineering, Philosophy of Science. You can follow any responses to this entry through RSS 2.0. You can leave a response, or trackback from your own site.