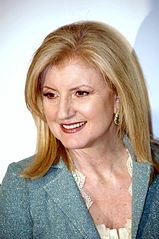 Arianna Huffington spoke at The Commonwealth Club in San Francisco last week. Interviewed by Facebook CEO Sheryl Sandberg, Huffington spoke mainly on topics in her recently published Thrive: The Third Metric to Redefining Success and Creating a Life of Well-Being, Wisdom, and Wonder. 2500 attendees packed Davies Symphony Hall. Several of us were men.

Huffington began with the story of her wake-up call to the idea that success is killing us. She told of collapsing from exhaustion, hitting the corner of her desk on the way down, gashing her forehead and breaking her cheek bone.

She later realized that “by any sane definition of success, if you are lying in a pool of blood on the floor of your office you’re not a success.”

After this epiphany Huffington began an inquiry into the meaning of success. The first big change was realizing that she needed much more sleep. She joked that she now advises women to sleep their way to the top. Sleep is a wonder drug.

Her reexamination of success also included personal values. She referred to ancient philosophers who asked what is a good life. She explicitly identified her current doctrine with that of the Stoics (not to be confused with modern use of the term stoic). “Put joy back in our everyday lives,” she says. She finds that we have shrunken the definition of success down to money and power, and now we need to expand it again. Each of us needs to define success by our own criteria, hence the name of her latest book. The third metric in her book’s title includes focus on well-being, wisdom, wonder, and giving.

Refreshingly (for me at least) Huffington drew repeatedly on ancient western philosophy, mostly that of the Stoics. In keeping with the Stoic style, her pearls often seem self-evident only after the fact:

“The essence of what we are is greater than whatever we are in the world.”

Take risk. See failure as part of the journey, not the opposite of success. (paraphrased)

“We may not be able to witness our own eulogy, but we’re actually writing it all the time, every day.”

“Being connected in a shallow way to the entire world can prevent us from being deeply connected to those closest to us, including ourselves.”

“‘My life has been full of terrible misfortunes, most of which never happened.'” (citing Montaigne)

As you’d expect, Huffington and Sandberg suggested that male-dominated corporate culture betrays a dearth of several of the qualities embodied in Huffington’s third metric. Huffington said the most popular book among CEOs is the Chinese military treatise, The Art of War. She said CEOs might do better to read children’s books like Silverstein’s The Giving Tree or maybe Make Way for Ducklings. Fair enough; there are no female Bernie Madoffs.

I was pleasantly surprised by Huffington. I found her earlier environmental pronouncements to be poorly conceived. But in this talk on success, wisdom, and values, she shone. Huffington plays the part of a Stoic well, though some of the audience seemed to judge her more of a sophist. One attendee asked her if she really believed that living the life she identified in Thrive could have possibly led to her current success. Huffington replied yes, of course, adding that she, like Bill Clinton, found they’d made all their biggest mistakes while tired.

Huffington’s quotes above align well with the ancients. Consider these from Marcus Aurelius, one of the last of the great Stoics:

Very little is needed to make a happy life; it is all within yourself, in your way of thinking.

Confine yourself to the present.

The object of life is not to be on the side of the majority, but to escape finding oneself in the ranks of the insane.

I particularly enjoyed Huffington’s association of sense-of-now, inner calm, and wisdom with Stoicism, rather than, as is common in Silicon Valley, with a misinformed and fetishized understanding of Buddhism. Further, her fare was free of the intellectualization of mysticism that’s starting to plague Wisdom 2.0. It was a great performance.

Preach not to others what they should eat, but eat as becomes you, and be silent. – Epictetus

This entry was posted on April 3, 2014, 9:03 pm and is filed under Uncategorized. You can follow any responses to this entry through RSS 2.0. You can leave a response, or trackback from your own site.